Tell us a bit about yourself.

I have been working in a medical university for the last five years and teach pathology to students in medicine and dentistry disciplines. I am also affiliated with the Jinnah Sindh Medical University (JSMU) lab. 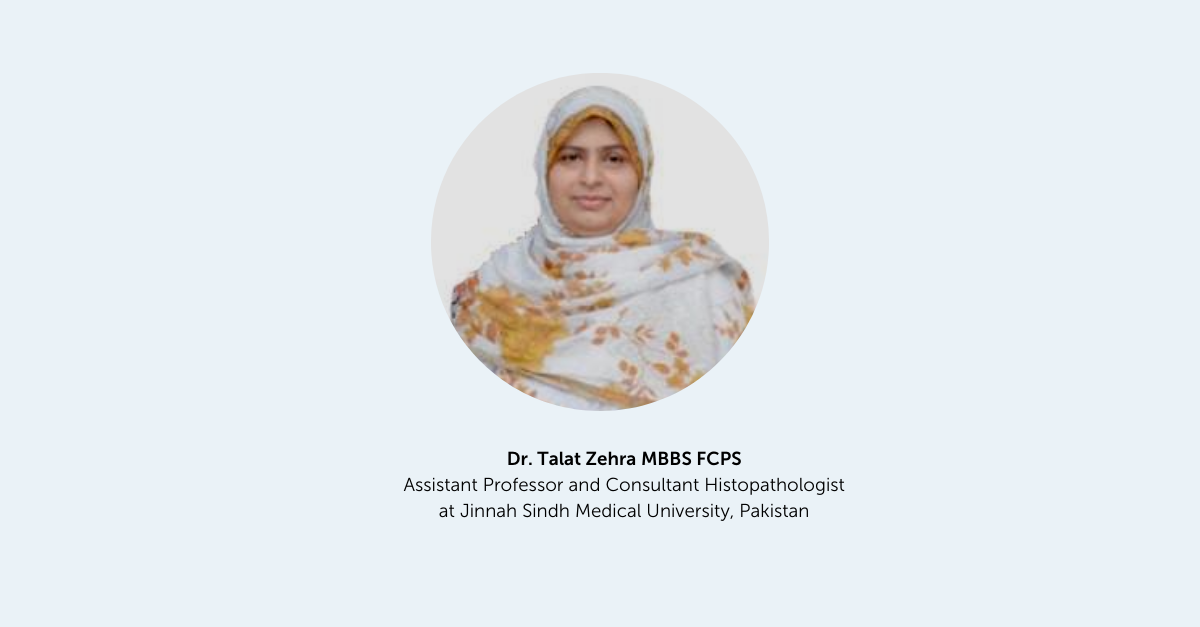 What is the status of digital pathology in Pakistan at the moment?

Digitalization is a rapidly adopting field all over the world. As far as pathology is concerned, in Pakistan, we use it mainly for research purposes, education and second opinion consultation. Use in primary diagnosis is yet to be implemented because of unavailability of slide scanners and digital microscopes.

How many pathologists are there in the region you work in?

If we talk about the pathologists who are concerned with cancer diagnosis, there are less than one thousand pathologist including both hematologists and histopathologists for the population of more than 225 million people (1 pathologist for 225,000 people) where incidence of new cancer cases annually is around 17,800 according to WHO.

Similarly we are still struggling with some of the endemic diseases namely Tuberculosis (both pulmonary and extrapulmonary), Malaria, Cutaneous Leishmaniasis etc., where the need for pathologists is unquestionable.

How do pathologists feel about using AI in Pakistan?

AI has impacted almost every field of life. Pathologists know about it but unfortunately they are not very familiar with its benefits as the majority of pathologists do not have the exposure of this novel technique which is now practiced in most of the developed part of the world. What we need, I believe, are a few large validation studies on common pathologies using the data of our own population to develop the confidence of pathologists and organizations. The cost of digital tools and AI software is also a cause of resistance in adopting these technologies both by pathologists and organizations.

What did you use the Aiforia AI software for?

I wanted to train myself on how AI enables digital pathology. I searched through many organizations but the bottleneck in the end was the absence of WSI scanners, so a lot of organizations refused me. When I contacted Aiforia I was welcomed by their customer success manager Dr Darshan Kumar, who not only encouraged me but also gave me the opportunity for hands-on experience with their demo version and also trained me on the AI software from the very beginning. For that I am highly thankful to Aiforia and this gentleman.

I used Aiforia on a few pilot studies. For instance, I worked on previously diagnosed cases of acute myelogenous leukemia. I used peripheral blood smears of leukemia patients, digitized them at 40x and added them to the Aiforia software. I trained the software to become green after identifying blast cells and become red after identifying red blood cells.

What was the biggest benefit of using AI for this?

The software not only identified the blast cells and red blood cells but was also able to quantify them, which is not an easy task manually.

What was your experience of using the Aiforia software?

I have no words to express my gratitude to Aiforia. Knowing that I don’t have a scanner or digital microscope, not only did they give me their demo version but also provided me with training very patiently.

Do you think digitization will become more popular in pathology?

Yes. The results of AI enabled digitization are beyond the scope of traditional microscopy and its use is inevitable. The use of artificial intelligence will likely transform decades-old clinical practices and the early impact of this will likely be the integration of image analysis and machine learning into routine histopathology. This is an exciting development that could discover novel predictive clinical information and potentially address international pathology work-force shortages. Having said that, there is a clear need for a robust and evidence-based framework in which to develop these new tools in a collaborative manner that meets regulatory approval. After that, the role of a pathologist will be not only of reactionary nature but pathologist can work on preemptive health by making disease trends and predictive models through data mining and data science.

As far as developing countries are concerned, beyond any doubt, they carry the burden of most of the world’s disease bulk but are unfortunately less equipped with diagnostic techniques, resulting in increased morbidity and mortality. The role of world leader organizations will be of utmost important in this scenario! 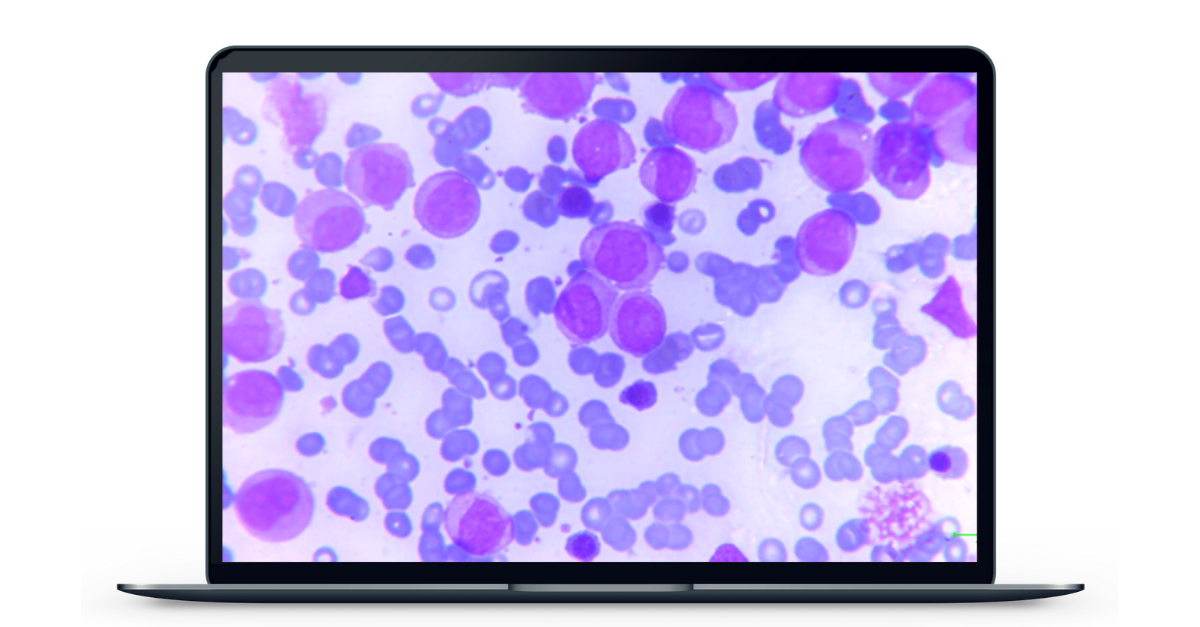 Fig 1.  Blast cells in peripheral film at 40x. The software was trained to identify various shapes and sizes of blast cells (blue arrows). 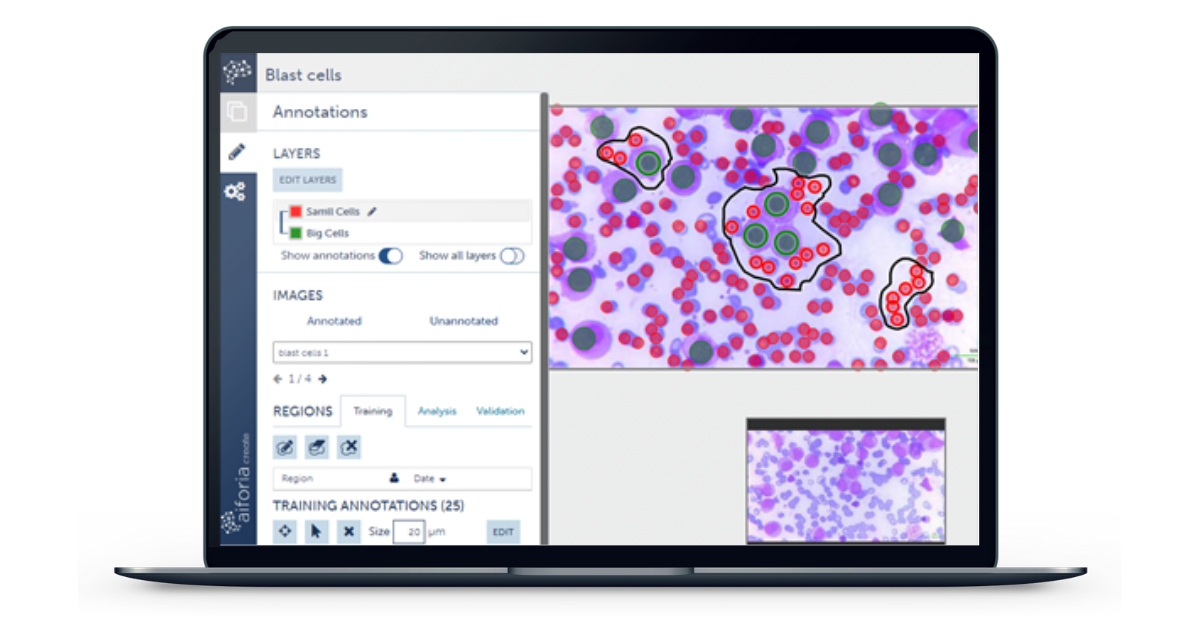 Some of the projects made with the help of Aiforia software on chorionic villi identification on previously diagnosed cases by using Artificial Intelligence.