Preclinical toxicology studies are an essential part of drug discovery and development processes. Safety studies of molecules are a regulatory requirement, to ensure their safety before proceeding to clinical trials. Saku Ruohonen is an in-vivo toxicologist at the Department of Translational Pharmacology and Safety Sciences at Orion Pharma Ltd, a Finnish pharmaceutical company. In the department, scientists perform a variety of preclinical studies aimed to evaluate these safety profiles. A major part of this evaluation involves histopathological examination from tissues collected for the preclinical studies. Pathologists try to observe very subtle changes possibly induced by the drug candidate from the harvested tissues.

Neurological diseases are a significant therapy area for Orion, creating a demand for precise and accurate assessments of toxicological effects in the CNS. Histopathological analysis in neuroscience is notoriously difficult. Toxicologists at Orion had just initiated one such study of biomarker identification in neurotoxicity when a toxicology student at the University of Eastern Finland, Miika Vuorimaa, reached out to Orion for a placement as a research scientist.

He had long expressed an interest in combining his studies with computer-based programs. At Orion, Miika was able to bridge these two interests together through the use of Aiforia, as he explained: “This project with Orion and Aiforia was exactly what I was looking for, it was surprising to me that I could do this as I thought the application of deep learning AI in histopathology was so far away in the future that I would not be able to get my hands on it for a while.”

Evaluation of neurotoxicity within preclinical studies requires skilled pathologists to define if cells in the CNS are being activated by the active drug molecule in the area. Astrocytes are known to form a first line barrier against foreign substances disturbing CNS homeostasis. They change their activity level and became reactive during any insult to the tissue. At Orion, the neurotoxicity study aimed to investigate biochemically the biomarkers excreted by astrocytes.

However, there was a problem validating the results. The induced neurotoxicity study had escalating doses and the biochemical levels of neurotoxicity biomarkers showed dose-response within the study. “At Orion, we needed the evaluation of neurotoxicity also from the pathological samples to validate the biochemical measurements,” Saku describes. “But for pathologist to evaluate subtle changes in the level of astrogliosis is very difficult.”

At this stage, the Orion scientists were introduced to the Aiforia platform, where deep learning AI could be used to evaluate these histological changes. Miika started to use Aiforia Create to develop AI models for identifying and visualizing astrocytes to help assess the correlation between biochemical and immunohistochemical observations. Both scientists anticipated facing challenges in working with deep learning AI for image analysis as Saku described: “I was convinced that with the small number of samples we had we would not be able to create a working algorithm, I thought we would need a huge amount of data.” Miika on the other hand thought the challenge would lie in an immense amount of preparation, as he stated “I thought he would need to know coding, but the ease of use of Aiforia was surprising. While it was easy to work with it still gave a lot of parameters you could adjust, it is so versatile.” The AI model required far fewer samples and far fewer annotations for training than either could have expected. 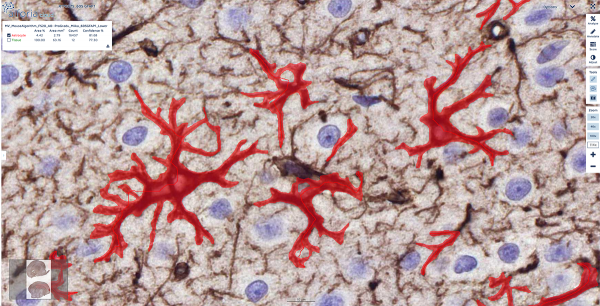 Aiforia was easily and successfully deployed, the AI models were trained, and quantitative data was produced in just 5 months. Both scientists were then able to reflect on the benefits of using this tool, particularly when compared to traditional methods as Miika explained: “If we had not had access to Aiforia, this analysis would have been much more time-consuming, it would be a lot harder, you could even say it would have been impossible to count these individual cells.” Saku was particularly impressed by the data Aiforia allowed the researchers to have access to, as he further elaborates on what Aiforia enables: “You can see subtle differences better and with much more accuracy, a key part of preclinical toxicological studies.” Miika was also impressed by the visual aspect: “One of the key things I found very useful during this process was it gives you visual feedback. That was a major benefit.”

The scientists were also excited with Aiforia’s ability to remove subjectivity, an issue pervasive in histopathological analysis as Saku described “A lot of pathologists would normally be required for analyzing these types of samples, leaving room for subjectivity. Even you yourself can be inconsistent and subjective from day to day, seeing features very differently.” With Aiforia, results are produced with consistency. Miika was particularly fascinated by this dependability as he stated: “These AI models are a very powerful tool, we now know that if we did a study looking at astrocytes today and repeated it next year on the same samples, we can safely assume we get the same results. This is a huge benefit in the early stages of drug development. It is crucial that we have tools which produce consistent and accurate results.”

As the astrocyte analysis is wrapping up, more research projects have spawned off for Miika to use Aiforia with. He is excited to continue using the platform “as an assistive tool” as he calls it, explaining his interest and excitement in “seeing how far and wide we can apply deep learning AI in the medical field. Pathologists are burdened with huge workloads, so this could be used to assist them.” Meanwhile scientists at Orion have started to develop further AI algorithms for other preclinical pharmacological and toxicological purposes.