The challenge: boundaries of AI-assisted analysis

AI-powered image analysis systems enable you to perform both multiclass semantic segmentation and object detection. These techniques allow pathologists to detect areas of different classes of region and counts of different objects. However, calculating the individual areas of segmentations and the individual areas of detected objects proves nearly impossible and is particularly difficult in the case of overlapping features, a common phenomenon in neuroscience.

Aiforia’s team of AI experts has solved this challenge with an advanced AI technique called instance segmentation — available to all Aiforia Create users through an intuitive interface. Instance segmentation enables object detection and semantic segmentation to be performed simultaneously to detect and delineate each distinct object of interest. 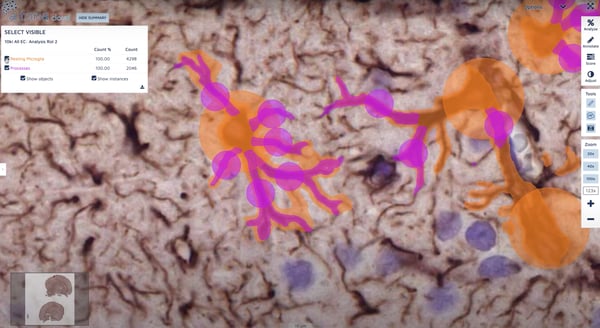 Aiforia’s latest technique allows users to identify true cell borders, their sizes and dimensions. Image analysis can be taken a step further with instance segmentation as detailed data on aspects such as area count, bounding, staining intensity and more can also be acquired.

Pathologists were able to use Aiforia’s instance segmentation technique to show the full microglia in addition to the individual processes despite some overlapping occurring in the image: Instance segmentation is not limited to neuroscience but can be used for any AI-assisted image analysis task with Aiforia, for example when... Want to see instance segmentation in action? We can even show demonstrate this novel AI technique on your own images.